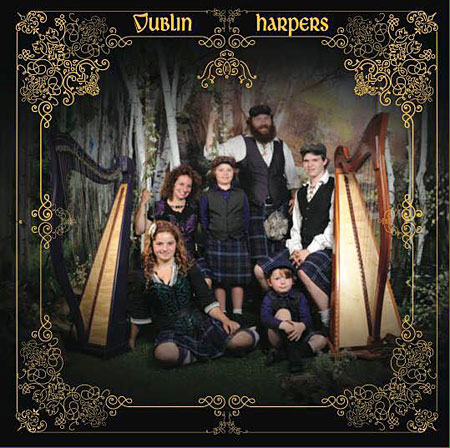 Interview with Benjamin and Candyce Dunham on January 10, 2018 by Phil Houseal

Jan 10, 2018–When I first started a family, I nurtured gauzy visions of sitting on the back porch, strumming guitar with my talented wife singing at my side and my precocious children playing along at my feet. Alas, despite spending thousands on music lessons, enduring endless variations of Twinkle, Twinkle, Little Star, the only kid to go forward in music decided he wanted to play drums like his dad. Other than on the twelfth day of Christmas, more than one drummer in any band is superfluous.

So it was with a bit of faux nostalgia that I gazed upon the Dublin Harpers at the recent Wild West Victorian Fest. There on stage was my vision: a handsome couple, surrounded by smiling children, all playing harps and strings and, yes, a drum–but a bodhran. There was even dancing and a didgeridoo.

Hard to believe that parents Benjamin and Candyce Dunham did not plan it. In fact if not for a fortuitous accident, they might never have gotten together at all.

“I was playing concert harp in high school marching band, and they would bring the harp out and roll it onto the field,” Candyce recalled. “They were trying to connect up the speakers when the crew dropped the harp and did quite a bit of damage. Benjamin’s dad repaired it.”

Benjamin’s dad happened to be a piano restorer, a trade picked up by his son. So it was natural that the two young musicians got together. Benjamin went to Columbus College of Art and Design majoring in 3D illustration and Special Effects. Candyce was awarded a full scholarship to The Eastman School of Music where she studied Harp Performance.

After they were married, Candyce competed on her harp at Celtic fests. As her family grew, she liked leaving them less and less. Since all four children were trained on piano and harp, it wasn’t long before they joined their parents on stage. “We were not really a family band before that, but we were always playing together,” Candyce said. “When we started winning Scottish and Irish music competitions, people started noticing.”

About five years ago, they made it official and became the Dublin Harpers. After all, they were from Dublin. Dublin, Ohio, but still. “Once we got enough gigs, we said, let’s go!” Candyce said. “It was a leap of faith.”

The couple and their children–Graham, 18; Grayce, 16; Guinness, 9; and Garrin, 7–now travel on two repurposed school buses and a car pulling a trailer, following the circuit of renaissance festivals and Celtic events most of the year. Sort of like the Partridge Family, but these kids actually play their instruments. And do everything else, by design, according to Benjamin.

“I picked up the idea of being totally self-sufficient from the book Zen and the Art of Motorcycle Maintenance,” Benjamin said, adding, “It just didn’t kick in for a couple of decades.”Both parents are certified teachers, so they are able to homeschool their children while on the road. Candyce, who built up a substantial music studio, is able to teach her students via Skype. Benjamin not only repairs harps, he builds the folk harps that they use on stage

Graham is handy keeping the buses running, and plans to become a diesel mechanic. Grayce manages the social media and marketing. In fact, they handle every aspect of their business from recording CDs to selling merchandise, even doing the design and screen printing themselves.

“We see it as a fun project!” Candyce said. “We have no axes to grind. It just evolved. Our basic philosophy is not to force anything, just go with the flow. People seem to be fascinated by what we do and the gigs keep coming.”

They are aware of their good fortune, and understand why many look with envy upon their nomadic lifestyle. “We like to find new places to play,” Benjamin said. “We could always go back to the same circuit for the next 20 years. We are not here to showcase my family; but to benefit the kids and to see the country.”

While they have a place near Austin to park their vehicles, they aren’t tied to one spot. “It’s an adventure!” Candyce said. “People ask us, what about your lawn? We don’t have a lawn!” And, no, I haven’t given up on my vision of a family band. We’re already lining up the first grandchild for Suzuki lessons.

Meanwhile, I am content to live vicariously through the Dublin Harpers.