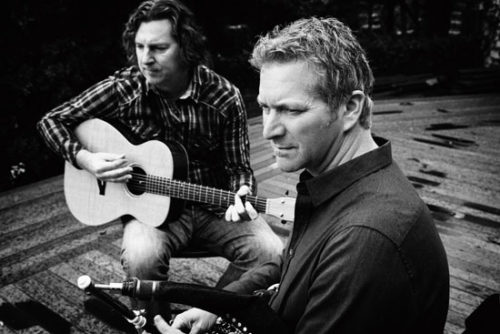 Celtic Music…From the Tradition to the Movies

Featuring Eric on Irish uilleann pipes, Scottish small-pipes & whistles, and Dirk on acoustic guitars, the two embarked on their duo project in 2014 with the goal of performing soundtrack music, traditional Celtic & World music, and original compositions using looping pedals, effects processors, and other music technology. Together they create everything from lush cinematic soundscapes to driving melodic grooves.

Dirk Freymuth’s gifted and diverse artistry on the guitar, lute, Baroque mandolin and viola da gamba spans musical genres from being a member of the Minneapolis power-pop trio, HINDU RODEO, to Dublin’s BAROQUE ORCHESTRA OF IRELAND.  As a studio player he has recorded for dozens of artists such as KOTTONMOUTH KINGS, THE PROCLAIMERS, JOHN GORKA and has produced more than fifty albums in a wide variety of styles.