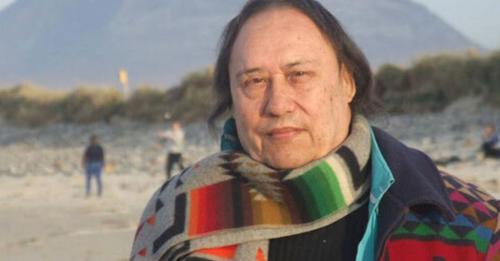 Waylon White Deer is a Choctaw Indian painter and author who has recently moved back to America after living in Ireland for over seven years, where he was often asked to represent the 1847 Choctaw donation to Famine Ireland.

He has had solo exhibits at the American Embassy in Dublin, the Doorway Gallery in Dublin, the Irish Cultural Center in New York City and the Southern Plains Museum in Anadarko, Oklahoma. He was commissioned to paint a solidarity mural in Derry during The Troubles. His work hangs in the Tunica-Biloxi Museum, Marksville, Louisiana and in Donegal Castle, Ireland. Waylon's images have been reproduced by several art companies. His painting awards include first place, Milwaukee Indian Market and Best of Show, American Indian Exposition.

He has served both as a tribal cultural resources director and an adjunct professor of Choctaw Studies at Bacone College. Waylon was designated a Master Artist by the Oklahoma Arts Council for his knowledge of Choctaw song traditions. He has sung for traditional tribal dance troupes at many public venues including the Olympic Games in Atlanta and the Gallup Inter-Tribal Ceremonials. His first book, Touched by Thunder is an autobiography published by Currach Press in Dublin as well as by Left Coast Press in America. His academic papers have been published by AltaMira Press in California and by Routledge Press, London.